Y'all haven't heard the last... 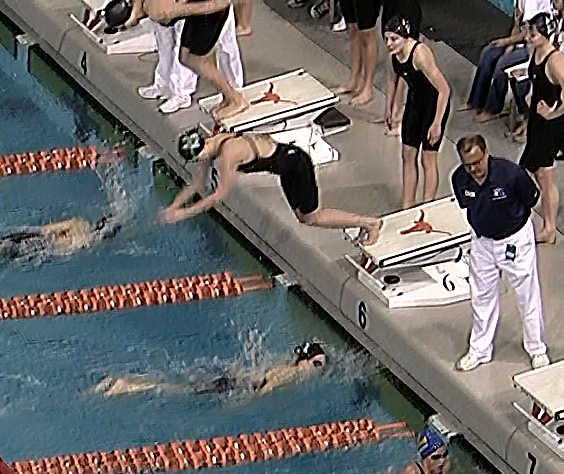 The UIL had to deal with this messy issue a couple of years ago.  No video review meant kids learned a tough lesson about adults, power, and politics.

The NCAA uses video review, but that still has many wondering how so many relays at the men's meet are being DQ'ed.  Read more here.

And I still see no official's eyes on Lane 6. That was SOCA, right? They got screwed. Huge Charlie-Foxtrot, and no mea culpa from You-Eye-Hell.

so sad...the swimmers train so very hard. they deserve the best technology has to offer. Glad the NCAA does an independent video review. One relay was saved with the review. Not sure how perfect the video camera technology is - or how expensive it is. and yes, SOCA got screwed. And the UIL still doesn't really understand swimming and how to select the best officials for their regional and state meets.

The UIL only selects Officials for the State Meet. There is limited oversight for the Region Meets. The state of Officiating supported by the UIL is sad and embarrassing.

The first step would be to improve the quality of officiating. Too many UIL only Officials take the online test and don't understand the stroke mechanics they are supposed to judge. As an Official who is currently certified by NFHS, USAS, CSOA and who has previously been certified by YMCA; based upon my 15+ years officiating, I've seen a wide variety of competencies. Many times I spend much of my time mentoring the UIL only officials. ( Note UIL - I won't comment on the number of times I have seen teams host meets where they only secured 1 "Official" or didn't have any Officials.)

I know this won't be popular with some, but based upon my experience, USA Swimming offers the best and most consistent training and certification. A good start for the UIL would be to only use USA Swimming certified Officials for the Region and State Meets. I'm not naive enough to believe this would solve all the problems, but it would be a good start.

AMEN!! completely agree - a good start. at one regional meet, hosted by Keller, southlake Carroll was prohibited from warming up in the competition pool on either day by a UIL only official. Obviously someone who had an axe to grind. Sad that a sport that should be and can be ruled by a watch has to allow adults try to influence by using their power. small minded folks