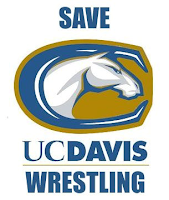 The UC Davis wrestling coach wasn't able to add women's wrestling, but he did give some gals an opportunity to work with the men's team.

The defendants, which included four now-retired university employees, denied the allegations and said that the athletes underwent the same tryout procedures as the men.

UC Davis never had a women’s intercollegiate wrestling team. Female wrestlers were granted unofficial status on the men’s team and received all the benefits of varsity status, according to the lawsuit.

But when a school official set a roster cap for the number of athletes on the Division 1 Pac-10 men’s wrestling team, players were forced to compete for their position.

Every wrestler, including the three females, were asked to participate in a “wrestle-off” with competitors of equal size and weight. The plaintiffs were cut from the team, along with several male wrestlers, according to the lawsuit.

The female wrestlers filed a formal complaint against the school that eventually landed in the courts.

For those of you new to Title IX quotas, roster caps are used to limit slots on men's rosters to help with proportionality issues.
Posted by Button at 5:54 AM