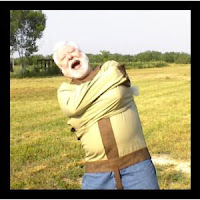 There was plenty of that as a panel discussed Title IX at Vanderbilt University last week. They managed to get in a few digs at wrestling as well.

"There are more men participating now today than there were at the beginning of Title IX," said Bayh, who represented Indiana in the Senate between 1963-81. "I don't know how you can say it's discrimination."

Yo, Birch! Our country's population was about a hundred million less back then.

I gotta do all the thinkin' 'round here?

Bayh said help could come from the NCAA if another president comes through like the late Myles Brand...

Now you're really scaring me, Birch!

Quick, is there a straitjacket in the house?!?!
Posted by Button at 6:16 AM