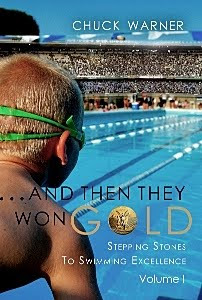 Below is a second excerpt from Chuck Warner's "recipe book".  Great stuff!


Author’s Note:
The book …And Then They Won Gold: Stepping Stones To Swimming Excellence Volume I was inspired by a conversation with Coach Eddie Reese suggesting that swimmers, coaches and parents could use a “recipe book” for how to reach their potential. The book contains eight short stories, about eight great swimmers that collectively won 28 Olympic gold medals. Each story reveals the experience that the athlete had from their very first swimming experiences to progressing to the Olympic gold medal. Each story also has inserted training programs that they used for each step in the swimmers’ development.
A second Volume is planned to tell the story of great women swimmers. The remaining athletes in Volume I are Matt Biondi (sprint free), Mike Barrowman (breaststroke), Josh Davis ( mid-distance free), Lenny Krayzelburg (backstroke), Ian Crocker and Grant Hackett.


Dave Berkoff excerpt and authors note: Dave Berkoff changed backstroke as we know it, extended underwater dolphin kick to more than 30 meters on his start. He improved his best time by more than two seconds in 1988 and broke the world record.
The younger swimmers’ practice at the cavernous Germantown Academy pool started precisely at 6:30 pm, and Head Coach Dick Shoulberg patrolled the pool deck. It was his domain, his classroom—every inch of it. His beard shielded his face from his swimmers’ eyes. He could stare you down when he looked out of his glasses, but it was difficult for a swimmer to catch a clear look into his eyes. His voice could sound like a growl when he wanted it to. He let you know who was in charge, and when it was time to start practice, you were in the water or you heard his growl.
Hmmm … let’s see … yes, the large red fiberglass starting block behind lane six was a perfect spot. David had used such a hiding place before at times just like now when he wasn’t yet ready to take the plunge into the cool water. Even Coach Shoulberg couldn’t outsmart him. David tucked himself into a small ball and cuddled up behind the side of the starting block near the corner of the pool.
“I want a 300 individual medley in reverse order,” the coach barked. “First length is drill, second is swim and the third is kick. Go on the 57.” Shoulberg liked innovation too. Why start on a round number? Anybody could do that.
The swimmers entered the water precisely on the 57 and every five seconds thereafter—that is all except for 11-year-old David Berkoff. David pressed his cheek and shoulder flat against the fiberglass block. His heart raced. He heard all the other swimmers turning and stroking but didn’t move a muscle for fear it might expose him to the sight of his new coach. Beyond the normal sounds that accompanied a collective of swimmers moving through the water, David sensed a stillness, a silence-like sensation that roared in his ears.
Where was Coach Shoulberg?
Shoulberg saw a foot sticking out from the side of the red block number six? Quietly, he bent over and picked up two hard Styrofoam kickboards and then tiptoed over near the block. He slapped the two boards together with all his might. “WHAACK!” The crack sounded like lightning had struck the very spot David was hiding. David scrambled to his feet and raced down the pool deck in the opposite direction as fast he could.
“BERKOOOFF!!!” the coach screamed in his loudest growl. Underneath the beard he couldn’t help but smile as he watched the chubby little boy scoot down the deck. “Berkoff, in the water noooow!!” David made a leaping dive into the pool and slithered into the group of swimmers.
Later that night Shoulberg met Judge Elaine Berkoff in the hall after her son’s first session at Germantown. The coach relayed the events of the evening.
“He’s a pistol,” Elaine said.
“We’ll look after him.” And Dick Shoulberg did.
Charles and Elaine Berkoff had every right to smile at the thought of their 11-year-old running on the pool deck. There was a time they worried about him running at all. In kindergarten David had such trouble coordinating his limbs in such simple activities as skipping that the school suggested he stay back to develop some coordination. It wasn’t that he was tall and gangly; as a matter of fact, he was short and quite chubby. At just a year old he weighed 17 pounds. The Berkoffs were a cerebral couple and David was a bright child. Charles had a Ph.D. and was an organic chemist who worked for a pharmaceutical company. Elaine had been an attorney and a district judge for 20 years. David seemed too bright to stay back in school just to gain some coordination.
Win a copy of ...and Then They Won Gold: Stepping Stones to Swimming Excellence, Volume 1* by being the first to email me the correct answer to this question:

Using his "Berkoff Blastoff", where did David Berkoff first break the men's 100 LCM back world record?