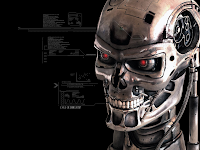 Once upon a time, you used to go to the movies, right?

You watched as computers/systems like HAL 9000, WOPR, and Skynet turned on humans, right?

The message was pretty danged simple:

Don't trust those danged computers as far as you can throw 'em!

These past couple of days, I've gotten emails and comments from plenty of folks that seem to have gotten that message.

Time to share some of what I've been sent and discovered/stumbled upon:

"I am an official-- it is going to take a combined effort between coaches and officials to get this changed. Neither of us like the system now."

If you're into using numbers to show a need for change, you know we need to show more than just an incident or two at just a meet or two, right?

How about all you meet directors that use the pads/lids to make relay calls going back through and tallying the NRT's?

How often, as a percentage did the system fail?

Check my numbers and correct me if I'm wrong:

When you figure there were 1,137 relay exchanges at the meets (five relay dq's in prelims kept it from being 1,152), around 3% doesn't sound like a whole lot of failures, right?

Okay, so the system admits to missing data and failing - not making a call - three percent of the time. So what?

Well, doesn't it make you wonder how often the system:
Another pic of the Southlake Carroll exchange in question: 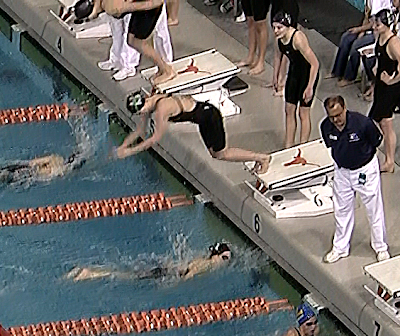 Why were there so many more girls' relays disqualified than boys'?

Don't give me a hard time on this one ladies:

At this level, don't girls generally weigh less and swim at a slightly slower speed than boys? Wouldn't that mean girls would hit the wall with less momentum than boys? Could that cause the pad to read a finish just a little bit late?

Also, would the lid read a take-off slightly sooner for a lighter-weight girl than a heavier-weight guy? Again, I don't know. Can someone who does know fill us in?

We're not hearing a whole lot of folks calling for the elimination of machine judging of relay starts.

What we are hearing, though, is that we need to give referees a chance to review video evidence that might keep a relay from being incorrectly disqualified.

Is it worth spending the time, money, and effort to set up video cameras (similar to one used in the 2008 Beijing Games men's 100 fly final)?

If you're one of those poor kids that swam their tails off, made sure their starts were safe, and still came home with a big bag of nothing, you bet it is!
Posted by Button at 5:35 PM

my biggest fear in posting on this topic is that i won't get a christmas card from the daktronics folks this year...

Daktronics has a premeet check sheet that includes a warning to the coaches about its unreliability - go check out the website. Also note - the team that uses towels to cover the lid - that actually fools the reaction time check. Hmmmm....

I should correct myself - the pre-meet check sheet does not indicate unreliability - it indicates what the lids do and don't do. Didn't want you to miss your Christmas card....