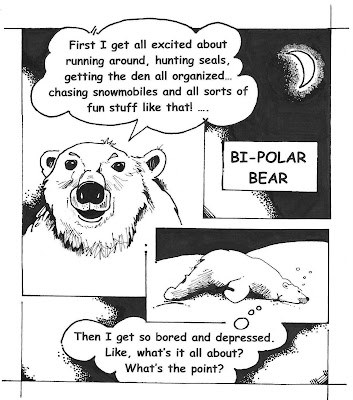 Is it possible? Could we call it "tripolar"?

How's this for nuts:

A former "co-worker" lifted something from my site, then pasted it - word for ding-danged-diddly word - onto his site.

What's the big deal, you ask? I mean, we all "borrow" from one another now and then, right?

You know there's got to be more to it, don't you?

Seems there's a reason I put co-worker in quotes. I'm still pulling daggers out of my back!

Don't tell me you can't read between those lines, bucko!

My buddies tell me:


Imitation is the sincerest form of flattery.

Looks like I'll have to give Charles Caleb Colton credit for this quote:

IMITATION IS THE SINCEREST FORM OF FLATTERY - "Usually said ironically when someone tries to gain attention by copying someone else's original ideas. Coined by Charles Caleb Colton in 1820 in his 'Lacon.' First attested in the United States in 'Malice' by E. Cameron. The adage is found in varying forms." From "Random House Dictionary of Popular Proverbs and Sayings" by Gregory Y. Titelman (Random House, New York, 1996).

via The Phrase Finder
Posted by Button at 5:20 AM

Email ThisBlogThis!Share to TwitterShare to FacebookShare to Pinterest
Labels: Ever So Slightly Humorous