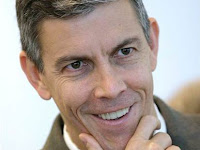 It's got to be one or the other. Either Education Secretary Arne Duncan is clueless on Title IX or he's lying.

Four decades after the law passed, Secretary Duncan seems to remain largely ignorant of the serious ramifications of this legislation, which, in effect, has helped institutionalize gender inequality, quotas and preferences. During the Tweet-up Duncan wrote, "Contrary to conventional wisdom, since 1972 access to men's sports has not been diminished." He added, "T9 requires schools to offer equal athletic opps for men & women. It doesn't require schools to eliminate any teams."

In actuality, between 1981-2005 men's teams per school dropped 17 percent while women's teams rose by 34 percent. The reason is this: the proportional participation clause in Title IX, upheld by Duncan's own department, states that if the number of female athletes is not "proportional" to the number of women enrolled at an institution then the school is technically "discriminating."

Duncan's ignorance -- or dishonesty -- about Title IX were additionally concerning because the AAUW and other feminist outlets would like to see Title IX-like legislation used to tackle disparities in academics, namely the "crisis" of women in math and science. In short, they want Congress to legislate parity in these disciplines, once again ignoring the real and important differences that exist between the genders. (Of course, this is always one-sided. I have yet to see the AAUW argue for more male English or Psychology majors. Nor have I seen any outrage about the shortage of male nurses.)

At some point, I hope feminists will begin to accept that men and women -- no matter how balanced the circumstances -- maintain different strengths and preferences. Because what is very clear is that legislation in the name of "gender equality" does not actually make men and women the same.
Posted by Button at 5:21 PM

He's both.....ignorant and lying in all probability.....my opinion of course.