The Eastern Michigan University men's swimming program is being dropped.

Complicit in the crime is none other than EMU Board of Regents chair & turncoat James "Benedict Arnold" Webb.

Believe it or not, the guy is a former swimming Eagle!

Hope you muted your b.s. detector, since the piece contains the usual manure:

The move affects 58 male student- athletes and 25 female student-athletes, and once realized an expense reduction of approximately $2.4 million.

Translation - We can avoid the Women's Sports Foundation shakedown if we jettison thirty-four (34) male swimmers.  Why bother finding ways to increase our undergrad male student population? 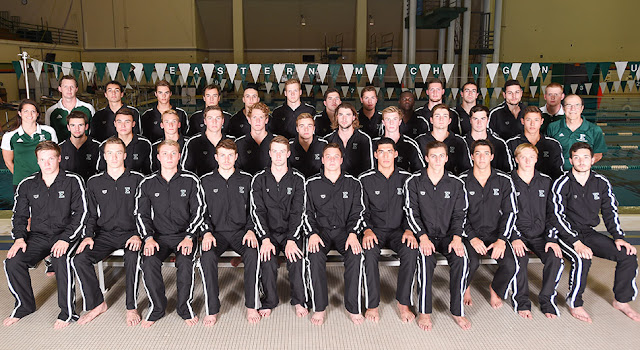 Also, so it doesn't look like a Title IX cave-in, we're going to sacrifice a few women softball & tennis players.

Let's not forget to fudge some numbers to make it look like we'll save millions.

Actually, we'll just funnel that money elsewhere...as you'll see in the next paragraph...

...and is part of our ongoing effort to realign resources to ensure that we continue to invest in high-demand high-quality academic programs and world-class facilities."

Notes- After they've kicked out the men, the women's swimming and diving program will continue training/competing in the same facility.  Guess the added lane space counts as turning their cement pond into a world-class facility...

Unfortunately, the women's program will almost certainly suffer in the coming years.  The trend toward mediocrity when men's programs are dumped means it's highly unlikely the ladies will improve on this year's 32nd place finish at the NCAA D-I meet.

Finally, in case you still have doubts about the relationship between men's sports cuts and Title IX quotas, I'll leave y'all with this:

The last time EMU changed its sports offerings was in 2000, when both men's tennis and men's soccer were discontinued and women's rowing was added.
Posted by Button at 6:03 AM

There is a follow-up article on swimswam with a petition and someone also started a gofundme. I have a few friends who swam at EMU and I also swam meets in their facility back in the day. It is really nice. This is a shame.

I swam for Peter Lynn from 99-03 and Buck Smith the Dive coach started is career at my HS while I was there they are both great men.
I choose that school so I could be part of a winning program!
It makes me sick that when a program is successful over decades that it actually means nothing to the University!

When Buffalo was cut last year, and Southern Illinois (the school I swam at) reduced their # of men's scholarships I knew that just about anybody or any team could be cut at any time. I hate it. It makes me sick. I hate these regents who are in charge of making decisions like this when it's either football or these regents failing to manage their budgets who are to blame.

it would have been easy to 'share the pain' and have each program at emu make due with a little bit less next year. across-the-board budget cuts are not all that tough to deal with.

maybe schedule one less away game/meet. get by with ten (10) percent less in the supply budget. cut back a couple of recruit visits.

there are many, many more ways to get by on a little less money.

no, this time it's not about the money.

emu must have a higher percentage of undergrad women than female athletes.

the quota system being used to satisfy title ix is destroying men's athletics.

proportionality is just one (1) of three (3) options schools have to demonstrate compliance.

unfortunately, schools are too cowardly to say 'no' to the proportionality 'prong'. they cave in and fail to defend their own student-athletes. pathetic!

in the end, both male and female athletes lose.

the males lose their opportunities.

the females lose nearly all hope of staying competitive on the national level.

the only winners are the lawyers who shake down universities trying to save men's athletics.

Button there was nothing more they could take away from us. We already paid for all of our own apparel, fundraised for our training trip and paid for our flights, paid by the hour for parking outside of the pool, and some even used their own suits at conference. We practically sustained ourselves.